Goldfish are colourful fish that are used as aquarium species, not as food for human consumption. They are aquacultured by large numbers of people and are easy to look after and breed. The ancestors of this species originated in China and naturally the majority dull brown colouration with just the odd one being a bright colour. But if you take the bright coloured ones and breed them together the majority of offspring will be bright colours and some will be the dull brown colours.

Colours are important as if someone is going to keep a goldfish as a pet then they usually want a pretty coloured one. Shape is also important and all sorts of varieties like fantails are available and aquacultured in NSW.

Koi Carp and the common carp are similar and are all members of the carp family. They originated in Japan and now are grow across the planet for their magnificent colours, large size and long lifespans. They can grow to a large size over 20 kgs, be very colourful and are prized as an ornamental pond species. When small they are similar to goldfish but the easiest way to distinguish between the two are the two pairs of barbells or whiskers they have. They are a bottom feeding species and these whiskers are sensitive help them feel and feed in the muddy bottom sediments in the wild.

They are easy to aquaculture being a relatively tough hardy species that will breed readily in captivity. 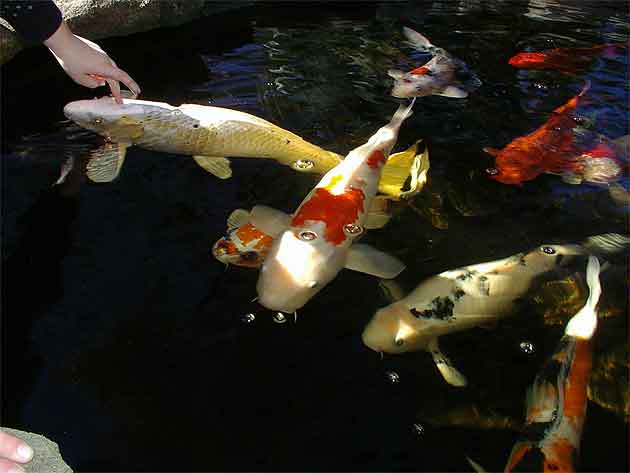 The ornamental aquarium fish trade in Australia has been estimated to be worth approximately $350million annually. In NSW we aquaculture approximately $500,000 worth of traditional ornamental species as well as the native perch, bass and yabbies that also enter the aquarium trade. Most ornamental fish are considered dangerous to the natural environment and NSW Fisheries has strict regulations for the aquaculture of ornamental fish to ensure they do not escape from fish farms. Natural waterways in NSW are seriously impacted by goldfish and carp and we are seeing a growing number of infestations from other species like swordtails, gubbies, redfin, etc. Further information on ornamental fish is available in the members data base.