Eel tailed Catfish are a native of NSW and can be found in both Eastern and Western River systems. There are at least a dozen different species of Eel tailed Catfish in Australia but generally in NSW it’s Tandanus tandanus that you will find. It’s a bit hard to give a colour description of the catfish as they do colour up the colour most suitable for camouflage in whatever environment they inhabit. We have some very muddy ponds which look like milk here and when we catch catfish from them they are a golden colour. However, once we transfer these to our inside blue/green holding tanks they darken in colour to a brown on top and a white belly. I have seen catfish that are black or olive or any combination in between.

Eel tailed catfish are also known as Dewfish and was the subject of an attempt to start an aquaculture industry around this species in the late 80’s. Unfortunately it never got of the ground as there are a few problems with the species. Firstly the supply of fingerlings is limited compared to other species. Secondly they are an ugly species. And thirdly they are a handling problem with sharp spines.

Overseas there is a massive freshwater catfish industry but not in Australia. Our catfish are not fork tailed but eel tailed. These catfish are a very tough animal with excellent eating qualities with firm, white, boneless fillets.

Eel tailed Catfish do not grow very large, under 10 kgs in size. They are widespread through out NSW and thrive in rivers and dams. Most large impoundments have very high populations of catfish as most fishermen will know. Catfish can feed at any time but best results are after dark when large numbers of catfish go into feeding frenzies. Catfish are carnivores which follow the food sources. Generally they are a bottom species but will quite happily feed at the surface if food is available there. Generally they eat a broad range of food, yabbies and shrimp are the main ones, but, worms, fish, insect larvae, tadpoles, frogs and snails etc are all consumed.

Generally catfish are excellent eating straight from the pond or dam without any off flavours. However some river catfish have been reported with off flavours. Catfish do not have scales as such and to eat them it is a relatively easy exercise. Just use a whole uncleaned fish and cut the fillets off and then fillet the skin off the fillet and you are finished in very little time. The resulting fillet is very clean without any further processing necessary. When cooked the flesh is very white and quite firm with an excellent taste.

One of the big advantages of catfish is the fact that it will breed in your farm dams. Even very small dams will see catfish breeding in them. They are spring/summer breeders and to breed they build a nest. It’s usually the males who do all the work and build a nest for the girls. The important ingredient you need for catfish to breed is gravel. Its gravel that the males build the nest out of. Nests are quite large and need the equivalent of 2 wheelbarrow loads of gravel to complete.

The male and the female spawn above the nest and the eggs then settle down into the nest. After spawning the female goes back to her life but the male stays and protects the eggs and nest. It should be mentioned that if you approach the nest being guarded by a male he can attack you. Attacks usually take 3 forms. Firstly there is the charge and bluff where he charges at you then veers off at the last moment. Secondly is the charge and ram. He just slams into you. And thirdly the most dangerous is the slash. He has all his fins and spines up and out as he slides by and against you at high speed slashing you with those spines as he rushes past.

Unlike most fish the catfish eggs take about a week to hatch so they must be protected or they would just be eaten by other animals.

You can tell the difference between Males and Females quite easily with catfish. They have a small protuberance behind the vent. In the males it is long and round as you would expect, but, on the females it is a triangular shape. They call these protuberances urogenital papilla and it makes identification of the sexes easy.

Catfish make excellent aquarium pets; they are very easy going and co habitat in the tank with most other species. Large animals are usually available all year round, but small fingerlings are usually only available December to February each year. 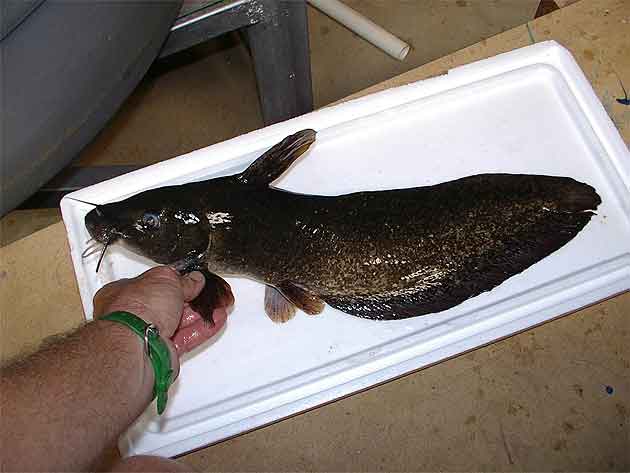