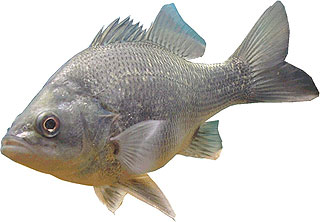 The Australian Bass is a native species of the eastern drainage systems of Australia. The Bass is a catadromous species which spends the majority of its time in freshwater , but migrates downstream each year in winter to breed. The winter spawning season in this region (Port Stephens) is dependent on various factors, temperatures and rainfall are the most important. Early April fish start migrating downstream if sufficient water in the river system to do so. Early May will usually see the first mass migration to salt water occuring. Rainfall and water levels are the key, and if sufficient rain does not occur spawning can be delayed for months or not occur at all. From May to August each year bass spawn in the saltwater lower reaches of the rivers and streams.

Australian Bass are a carnivore, they feed on insects, insect larvae, shrimp, yabbies, and fish, etc. Bass are ferocious feeders and consume vast amounts or food but grow relatively slowly compared to other species. As a aquaculture species they are not preferred at this stage though current research may see them become a major aquaculture species in the future.

Bass are a prized sporting and eating species, they readily take lures and flies as well as baits. They hit hard and fight well so are stocked into rivers lakes, impoundments and farm dams for recreational fishing. Many inland fishermen practice catch and release and bass can be captured time and again creating great sporting thrills. Bass are not a large species on the scheme of things, in the rivers a good sized fish is approximately 1Kg, whereas in the freshwater impoundments fish of 2Kgs are more common. Bass do grow to over 3Kgs but generally are to smart for anglers to catch. Bass are excellent eating and are considered the best eating of all freshwater species by many anglers in NSW. Bass is number one followed by Murray Cod followed by Yellowbelly (Golden Perch).

As an aquarium species bass are perfect. They are friendly and sociable with other species and can be trained onto pellets if started young. Feeding bass earth worms, frozen prawns and spaghetti are the normal foods most people would use. Many people catch small bass when fishing as they attack lures with a vengeance and are easily caught. It is not uncommon to catch small bass on lures that are only slightly smaller than the lure. They handle well and survive easily in a bucket of water for transport home to your tank. One of the major anomalies is that there is no size limit on bass, only a bag limit of 2 fish. This makes it quite legal to have small fish in your possession.

As a excellent sporting and eating fish, bass are in demand for stocking and a large hatchery bred fingerling demand occurs for this species. Aquablue and Narooma fish hatcheries artificially breed Australian Bass each year in their hatchery system. Bass are a hard species to breed, but these commercial hatcheries manage to produce hundreds of thousands each year.

Australian Bass are perfect to farm dams, you just purchase small fingerlings from a commercial Bass hatchery and drop them in your dams. They will take several years to get large enough to eat and 30% generally will not make it to an adult size. You need to artificially breed bass, though they will roe up in your dam they are not going to breed in farm dams.

We catch sexually mature fish from the rivers or our dams, take them to our hatchery and anaesthetise them in a small tank. We then weigh the fish and inject a hormone into the fish. We use HCG (human chorionic gonadotropin) at a dosage rate of 1000IU/Kg for females and 500IU/Kg for males though this is just a base and the hormone dosage can be raised or lowered dependent on various factors like time of year and water temperatures etc. Bass are a social species and we breed at least 2 females and 4 males per tank for farm stockings.

We like at least 2 males per female as with only one male the fish can become lazy but if two then they will compete against each other to be the first to breed with the female. Also by having at least two females per tank and at least 4 males per tank we are increasing the genetic diversity within our final fingerlings ready for sale. In addition to this we usually do from 2 to 3 tanks at a time and the offspring from all those tanks are distributed evenly through the ponds stocked. Any given batch of fingerlings purchased usually is made up of fish from at least 4 to 6 females and 8 to 12 different males. This gives a large genetic pool and the importance of this is becoming increasingly important as wild fish stocks dwindle.

For stocking in Public Waters it’s a bit more complicated as we need to breed 8 pairs of fish in 8 separate tanks to achieve the desired genetic combination re our Hatchery Quality Assurance Scheme.

Fish, once injected, are released into tanks of marine salt water which are well aerated and heated to 18 deg C. Approximately 36 hours after injection they naturally spawn in the tanks if all goes well, if not we can take then out and strip them (squeeze the eggs and sperm from the fish into a bucket and mix by hand.) Natural spawning is the best as generally we have 100% fertility. Stripping only gives us 50% at best. After spawning the eggs are left one hour to water harden then the brood stock is removed. The eggs are kept in the tank in dark conditions for 48 hours until they hatch. Once hatched the larvae are kept in the tank for 5 to 9 days before transferred to prepared outside ponds. These ponds are filled with marine salt water and fertilized to promote algae and zooplankton growth for the small baby bass to feed on.

Several months in the ponds sees the bass big enough for sale. Once the bass are released into the outside pond from the hatchery they are kept in marine salt water for at least a month before freshwater is slowly added and the salt content is diluted. By fingerling harvest time they are in pure freshwater.

Australian Bass numbers have been reduced in the wild over many years, the reasons for this are numerous but some of the main contributors are the construction of weirs and dams on coastal rivers and prolonged draughts, etc. which impend the spawning migrations downstream to saltwater. Also once in salt water the fish are vulnerable to netting by illegal fishers and vast numbers each year are captured. Recreational fishing clubs and councils are recognising the importance of bass as a recreational species and are enhancing natural populations by purchasing stock from commercial hatcheries for restocking in the wild. The NSW Government also recognises the importance of stock enhancement and from money raised from the recreational fishing licence offers a Dollar for Dollar scheme where clubs or Councils etc seeking to stock bass into the wild can obtain Governmental assistance and for every dollar they raise the government matches a dollar. This allows twice as many fish to be stocked and good news for a hatchery like mine and great news for the recreational fishermen of NSW.

If you would like to buy Australian bass fingerlings then try one of these bass hatcheries: